We have a Winner!

Congratulations to Barbara Huddleston. She won the free eBook from Candace yesterday.

Thank you to everyone who stopped by and for Candace for taking time from her immensely busy schedule to answer a few questions.

I also encourage everyone who stopped by to check out the blogs of the commentors. They are all very talented authors. It's all about the networking ;-)

Happy Writing!
Angela!
Posted by Angela Drake at 10:12 AM 1 comment:

Get your Vamp on- with Candace Havens

I am happy to introduce you to today's guest. Candace Havens is an amazing woman with more energy than a power plant. I've been a part of her Write_Workshop Chat (yahoo) group for several years. She always provides us with top-notch workshops for FREE from people who've been there, done that. Her networking skills are a big part of her weaponry. See, when she's not writing an outstanding book with powerful characters, she's interviewing celebrities like George Clooney and Tom Cruise for her day job! Dang!

Bestselling author Candace Havens has written six novels for Berkley including, Charmed & Dangerous, Charmed & Ready, Charmed & Deadly, Like A Charm, The Demon King and I and Dragons Prefer Blondes. Her books for the Blaze line at Harlequin include Take Me If You Dare, She Who Dares, Wins, Truth and Dare, and The Model Marine. She is also in the anthology Spirited, and the proceeds go to help literacy. In addition to Take It Like a Vamp, she has the steampunk novels Iron Demon (Oct. 2012) and Iron Blood (April 2013) from the Maisy Clark series debuting with Entangled Publishing.

Her books have received nominations for the RITA's, Holt Medallion and Write Touch Reader Awards. Model Marine is a National Readers Choice Finalist. She is the author of the biography Joss Whedon: The Genius Behind Buffy and a contributor to several anthologies. She is also one of the nation's leading entertainment journalists and has interviewed countless celebrities including Tom Hanks, Nicolas Cage, Tom Cruise, George Clooney and many more.

Her entertainment columns can be read in more than 600 newspapers across the country. Candace also runs a free online writing workshop for more than 2000 writers, and teaches comprehensive writing class. She does film reviews with the Dorsey Gang on New Country 96.3, and is the President of the Television Critics Association. 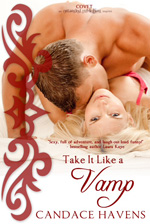 Here's a sneak peek of 'Take It Like a Vamp':


Vampire Nick Christos might have been born in the Middle Ages, but those days seem tame compared to the last eight years spent ruling the Supernatural Council. The only respite in his long days of governing is with his sweet neighbor Casey Meyers. Sure, he’s forced to take a cold shower after every encounter, but no way will he risk anything more with a human. Not with his blood thirsty ex on the prowl and out to ruin Nick’s life. But when said crazy ex shows up at the ball and flies her freak flag high, Nick has more to worry about then keeping his hands off his neighbor. He’ll have to stay closer than ever if he hopes to keep her alive, but will she want to leave him forever when she learns the truth?

Today, Candace has graciously agreed to answer five questions from me. I hope you'll leave a comment as you just never know when Candace will pop in for a few moments to say Hi! Just for a moment of your time, you'll have the chance to WIN your very own copy of the eBook - Take It Like a Vamp

Let's check in with Candace...

You weren’t excited about writing a vampire story at first. What was it about the story that changed your mind? And is there another already in the works?
There is another one in the works, with the best friend Linc. I know that will make some Linc fans very happy. And I really did swear I would never write a vamp story. Don’t get me wrong, I love a good vampire stories. It just felt like they’d been so done. Then, my editor, Liz, made a suggestion and the story popped out of my head so fast. I’ve never had a book fall out of my brain like that.

You have a very impressive release schedule over the next fourteen months. What started the ball rolling? And did you expect the giant snowball that has followed?
No, I didn’t expect it all. A couple of years ago I was wondering if I had what it took to survive the business. It can be heartbreaking at times. But there always seems to be a carrot when I’m at my darkest moment. The day after I thought about quitting, my fantastic editor, Kathryn at Harlequin Blaze, asked if I might be interested in writing for them. Then, last fall I was wanting to dive into something new and I ended up writing steampunk (Iron Demon (Oct 2012), Iron Blood (April 2013). A few months later the whole thing with the Vamp story came around. And in the midst of all of that, Harlequin asked if I would do another Marine story and be in a Christmas novella with Lori Wilde and Kathleen O’Reilly – I mean, they’re two of my favorite authors. It was like, why the heck are you even asking? Of course, I’ll do it. It’s been a little nuts but I wouldn’t trade any of it. Oh, and there’s another paranormal that I can’t talk about, that will probably be out in the next few months. Again that’s my Entangled editor’s fault. (Smile)

There’s nothing like a crazy ex to bring a little interest to any story. Was their anything about their past relationship that affected how Nick views things now?
Oh, he and Casey have trust issues. And that nasty ex brought that all to a head. Oh, Alvinia how we all love to hate you so. I think she really screwed with Nick’s idea of what a woman could be. That’s why Casey is so special to him. She has helped him see what a real relationship is all about.


It appears Nick isn’t the only one with the power behind Take It Like A Vamp.
Would you please tell us about the Vamp Squad and their importance?

These are the most amazing group of people. They tweet, they facebook, they tell all of their friends about Take It Like A Vamp. I’m giving away prizes, but most of them don’t care about that. They just love the book so much they want everyone to know about it. How great is that? I’m so darn lucky and I know it. If I was Oprah, I’d buy them all a car. Some day, gang. Some day. (Smile) Oh, and no one has won the iPad3 yet, so there’s still time to join through my website.

You are one of the busiest people I know. What is your one best time management tip for writers who are serious about this journey?
Stop talking about it and do it. It’s after midnight. I’ve been up since 6 a.m. and I have another two hours of writing ahead of me. Sleep is for the lazy. (I’m only sort of kidding.) You have to make writing a priority or you’re never going to make it.

Thanks so much for letting me hang out!!!!  Candy

Thanks for being here, Candy. Now I'm off to write!
For the rest of you, if you've not done so yet, I encourage you to join the Vamp Squad. You're in for some very cool prizes just for helping a girl out!
You can also follow Candy on Twitter: https://twitter.com/CandaceHavens  She's always looking for writer buddies to help keep her awake and writing.

I have 1 GOAL for this week. Rough out 3 contest entries.
The writers retreat last weekend was more about the stamping convention so I wasn't too upset with the fact that all I managed was an article for Polymer Cafe magazine. It's the first of three I have coming due so that's okay.

But the OCW contest deadline is coming up fast and I need to get my butt in gear. I may have found what to write about for the travel article category and I did get a thumbs up on a critique for one of the shorts. There's still time for you to submit something and/ or get in on the early registration for this awesome conference!

So my GOAL for this week:
1- paranormal short story
2 - My Favorite Things creative non-fiction
3 - 1 other short

Tomorrow, we have a very special guest so you won't want to miss her!
Keep Reading, Keep Writing!
Angela
Posted by Angela Drake at 11:20 AM 1 comment:

Yes, I know I'm behind. The last post was about Bob coming home. I don't do a lot of computer time when he's home. I do the writing I need to do and that's it. He is the most important person in my life and when he's home, it's all about him. He truly is my hero.

That said, he leaves out tomorrow for his three weeks of playing riverboat Captain and I'll be back to my regular routine. Beginning Thursday I'll be spending four days with a friend from my Peoria crit group. We're looking forward to an intensive writing/ critique session - just us girls.

So tomorrow I'll work fast and furious on the rough draft of a paranormal/ time travel short story. Think the Ghost and Mrs. Muir. I love doing these kinds of stories. Part history and part contemporary, letting me play in both worlds. I'm planning to enter the story in the OCW competition. The deadline for entries is the end of this month and I have 'a few' I want to have done.

What are you working on?
Creative Blessings
Angela
Posted by Angela Drake at 6:37 PM 1 comment: