As we approach the holidays, the contests and conferences have dropped off. I am positive the flood gates will open again about February. I'll be on the look out for new opportunities to share with you in 2014.

The only CONTEST is NanoWriMo. And while nano really isn't a contest, it is a challenge for us to push our boundaries. Like contests, Nano is an opportunity for us to try something new. Maybe you've had a story idea that is not in your usual genre parameters. NanoWriMo is the perfect opportunity to PLAY!

And who knows, you might just come away with something contest or submission worthy in the new year!

Enjoy your holidays!
Posted by Angela Drake at 9:02 AM No comments:

THE WEEK AHEAD - Nano Looms!

There's a nip in the air, the leaves are changing colors, the birds are feasting heavily at my feeders. Those are all sure signs of.....

You thought I was going to say fall, didn't you? Until ten years ago, I would have. But then I got bit by the Nano bug and my autumn's have never been the same.

Have no clue what I'm talking about? The greatest writing challenge EVER!
National Novel Writing Month  aka NanoWriMo challenges you to write 50,000 words of a NEW novel in 30 days. To sit down and write that book you've always said you wanted to write but never made time to do. November IS THE TIME!

Yeah, November is crazy with holiday preparations, mid-terms looming... blah blah blah But when else are you going to find so many like minds in one place to cheer you on - or commiserate with? Okay, there are other times (I'll be telling you about those as they become available) but nothing like NANO!

I've made some amazing friends through NanoWriMo and my novella under contract with Boroughs Publishing Grp, Somewhere Down the Line, was written during the 2012 challenge.

This week I'll take time to put together my SMASH book for my Nano2013 Project, Heart on the Line. I do better with more than an idea to play with. I need to know who my characters are, what they want and what's going to get in their way. That's all I started with last year and I wrote the rough in 18 days! I have no notion of doing that this year, but I do plan to get the rough written.

So come on! Join the FUN!

NETWORKING - Not for the Faint of Heart Part 2 -

IF you missed Part 1 of this discussion, you can go HERE

I know I promised this part of our social media discussion several weeks agon, but I have a valid excuse. I’ve had to totally strip out my bedroom and everything from there is in the living room while we remodel from a flea infestation. Nothing is where it should be and I’m a bit out of sorts. I’ve also been practicing this week’s topic. NETWORKING.

I will admit that most of my networking has been for the freelance side of my writing. By day I spend my time making connections in the music industry. I promote artists and where they are playing. After several months of friending artists, promoters, managers and music publication editors on Facebook and tweeting/ following the same people on Twitter, my name is finally getting passed around. More artists are friending me first, instead of the other way around. They are favoriting my tweets, and tweeting back thank you’s. Well, that’s great that these people all know who I am, but what is the purpose? I want them to know who I am so when I approach their people about an interview, I am more likely to get a YES than a no. That’s where the money will come from.

Networking is laying the groundwork for bigger things. Networking is important in ANY business but I think even more so for independents like authors, musicians, artists, etc. People who do not have the backing of a corporation to promote them.

But as in any business, there are rules to follow. Nothing aggravates me more in this business than SPAM on Twitter and Facebook. They call these two formats ‘social media’ for a reason. Before I go there, let’s talk about SPAM.

SPAM is when someone only posts lines from their books with a ‘buy’ link.
SPAM is only posting to your wall or twitter when you have something to sell.
SPAM is all about ME ME ME.

I've heard people say, "I don't see the purpose. They don't work for me."
There's an old addage in the business world - "XYZ Works, when you work the program."
You have to put in some time. TIME is a post for next week (promise)

Some people post horoscopes or quotes. While these avenues get your face on the ticker, they also become something people glaze over so you’re wasting your time. The best way to make these places work for you is to hook up with authors you admire or who write in your genre. Talk about your character. If you’re book is set someplace you've never been, search for people in that area and ask questions. Writing a historical? Follow or friend historical societies, museum curators, weapons experts, etc.  Make connections. Get to know these people.

One of the coolest gals I know on twitter (outside of my local peeps) is Amber Lee Easton aka @mtnmoxiegirl  She is from my home state of Colorado. She talks about her day and fitting writing in amongst everyday life. She posts pictures from her deck that make me homesick. We have common ground. We began tweeting back and forth and now it’s an almost every day occurrence.  Because we've built a relationship, Amber knows she can count on me for retweets of the important things and vice verse.  That’s how this Social Media thing is suppose to work. Work it! You meet some really cool people and expand your network at the same time.

The bonus is that READERS will follow their favorite authors on FB and Twitter. So when I tweet to Amber, using her @mtnmoxigirl in the tweet, my name goes out to her followers too. Over time, this will expand my reader base.


The other question I'm asked all the time is 'How do you have time?"
That's next week!

A couple of weeks ago I took advantage of a FREE read from Amazon by Bernadette Marie entitled The Executive’s Decision. Although I found some mechanic issues in the writing, I fell in love with Zachary Benson, Regan Keller and her family. The Keller’s are a family that comes to the aid of one another no matter what and are fiercely protective of each other. Sometimes, you just want a feel-good story and Bernadette Marie has written an entire series.

Bernadette Marie has been an avid writer since the early age of thirteen when she’d fill notebook after notebook with stories that she’d share with her friends. Her journey into novel writing started the summer before eighth grade when her father gave her an old typewriter.

In 2007—after marriage, filling her chronic entrepreneurial needs, and having five children—Bernadette began to write seriously with the goal of being published. That year she wrote 12 books. In 2009 she was contracted for her first trilogy and the published author was born. In 2011 she opened her own publishing house, 5 Prince Publishing, and has released her own contemporary titles. She also quickly began the process of taking on other authors in other genres.

Bernadette spends most of her free time driving her kids to their many events—usually hockey. She is also an accomplished martial artist with a second degree black belt in Tang Soo Do. An avid reader, she enjoys contemporary romances with humor and happily ever afters.

Bernadette Marie is here today to share the latest in the Keller family saga. Love Songs brings a second generation Keller to the forefront with Clara Keller. 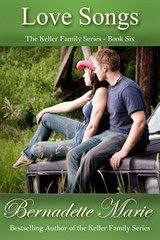 BLURB:
Warner Wright is looking for that big break into country music, but the reputation of his ex-stepmother is getting doors slammed in his face. But when he hears the angelic voice of Clara Keller—he knows she’ll be his ticket.

When the talented Clara Keller and the sometimes awkward Warner Wright get together there is a spark even bigger than Nashville. Opportunity is going to knock on their door, but fame can be a tricky bedfellow.

Making beautiful music will be the easy part. Facing Warner’s past might corrupt them both.


EXCERPT:
Could the sun possibly be any hotter, or brighter, or…
Warner’s brakes screeched as he came to a stop at the stoplight he’d nearly run though. The glare from the hood of his Ford was blinding. The sweat on his neck was annoying. And the fact that he’d just been told he had no talent, well that was pissing him off.
He had talent. He had a butt-load of talent. Warner Wright had performed on every stage in Nashville. Oh, he’d performed with some of the biggest names when they were begging for a job.
He let out a breath. So why had he been passed up?
Oh he knew why!
The reputation of his family came long before he started trying to sell his songs. One thing about being the ex-stepson of Patricia Little, was all of Nashville knew she was trouble.

I hope you'll pick up one - or all - of the Keller stories and become one of the family.