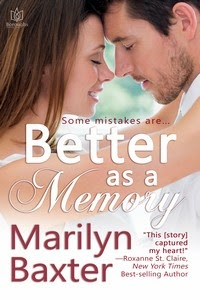 I am pleased to have Marilyn Baxter as my guest today. Marilyn and I met when she searched for other 'finalists' in the "What's In A Name?" competition through Boroughs Publishing Group almost a year ago. I am blessed by her initiative.

Marilyn's novella, BETTER AS A MEMORY releases TODAY! And she's here to celebrate with us.
Welcome, Marilyn!

1. Better As A Memory is due out today with Boroughs Publishing as a result of a contest your novella was a finalist in last summer. We were to be inspired by a song title. What about this song inspired the story?
The story was originally titled Seduction with Style, and it was going nowhere.  I was stuck.  Then a friend who writes for Harlequin Desire (a big shout-out to Kristi Gold!) was helping me brainstorm and she uttered the magic words, “Have you ever listened to ‘Better as a Memory’ by Kenny Chesney?”  I had not, but I’ve listened to it repeatedly since then and that’s when the story began to really move forward.  The line “I’m better as a memory than as your man” nagged at me until I realized it was the motivation for the heroe’s actions when he and the heroine were in college together. Then later he comes to understand the mistakes he made are better as a memory than something keeping the two of them apart.

2. What do you hope your readers take from Better As A Memory?
This is a reunion romance about second chances and happily ever after.  I hope readers will see the healing power of love whether it be romantic, familial or platonic love. Love does conquer all.

3.  I know you love tea and enjoyed the availability of quality tea on your trip. What types of tea do you enjoy and do they change with your mood or just ‘this sounds good’?
Black teas are my favorite, and for the last year or so, I’ve been drinking a brand called Builder’s Tea. I can’t buy it in my town but it’s available at a store where my son lives.  So when I visit him I usually buy several boxes. I like it because it brews in 20 seconds, and that’s often all the time I have, especially when I’m trying to get up and at ’em in the morning. But I also like English Breakfast and Irish Breakfast teas and I found some Welsh tea in a shop recently that’s good as well. When I was in London last fall I bought and shipped home a lot of tea. And I mean a LOT! It had names like Jubilee (in honor of Queen Elizabeth’s 60 years on the throne) and Afternoon Blend (great for an afternoon tea party). And I bought a spice blend that was terrific on cold wintry nights.

I’m not so sure my tea choices change with my mood, but I sure do buy some because “this sounds good!”

4. What is the best advice you have ever received about the publishing journey and how have the words of wisdom helped you?
A very wise women (cough Roxanne St.Claire cough) once told me to forget about the rules while writing the first draft because that can suck the joy right out of writing.  That’s what had happened to me.  When I first started writing, I had no idea about rules.  I had no clue about POV or GMC or any other letters of the alphabet except the ones spelling the words of my story.  Then I began to go to workshops and read books on the craft of writing, and I became so bogged down with trying to follow all those rules that the story almost became an afterthought.  By following my friend’s advice and just writing through the first draft, I could concentrate on my characters and getting the bones of the story on paper.  Once that was done I could go back and make sure I’d followed the rules.

A pregnant American woman walks into a Dublin pub looking for the man with whom she had a fling several months before.  After that?  Not sure yet.  The idea is still percolating.

And it’s still percolating.  LOL!  I have another idea about a woman who inherits her grandmother’s home in Ireland and the handyman who helps her fix it up to sell.  There’s a matchmaking neighbor who’s afraid the cottage will be torn down to make way for some sort of ghastly newfangled house, too.

I fell in love with Ireland, especially the town of Killarney, which is where the second idea is set.  I’d love to visit again, but at least I can visit vicariously with writing.  And it gives me a good reason to look at my photos again and again and again.

6. Will you share a bit from BETTER THAN A MEMORY with us?
Sure!

BLURB:
Looking at her potential client, Atlanta image consultant Victoria Sharpe is convinced the job will be a cross between What Not to Wear and Man vs. Wild. She’d love to turn down the offer, but refusing it—not to mention the referrals it could generate—just might break the bank. Yet, agreeing to make over this man’s image might also break her heart. Again.


Max Brown will tolerate anything to gain access to his trust fund. Returning to work in the family business, even submitting to his mother’s demands to trade his comfortable flannel for Armani is worthwhile if he can get the money necessary to start a camp for at-risk boys. But then he sees he’ll be working with Victoria Sharpe, his college girlfriend, the one who got away. Or, really, the one he left. The impression he makes here will be the most important of his life, and the person most as risk is himself.

EXCERPT:
“You certainly are set for the next trip through the Donner Pass,” she said. One corner of her mouth turned up ever so slightly.

“Come along with me and I promise I won’t eat you up,” he replied without thinking of the double meaning his words might have. “I’ll protect you.” He grunted and pounded his fists against his chest.

“If you think you’re getting out of our shopping trip by sweet talking me, think again, wild man.”

“Sweet talking? Me?” The easy banter between them felt good. It felt right. Just like it had before he’d decided he couldn’t live in Tripp’s shadow anymore. “That wasn’t sweet talk, but I can turn it on if you like.”

I could turn you on, too, just like you’ve done to me. The rogue thought sped through his mind.

Just then, Victoria knelt, and when she rose, his underwear hung from her index finger.
“I see you weren’t joking about black silk boxers.” She swung them back and forth like a red cape in front of a bull.


He grabbed her hand to still it and took the garment from her. “Sweetheart, I never joke about anything black or silk.”

Thank you for joining us today, Marilyn and good luck with sales for this wonderful story! 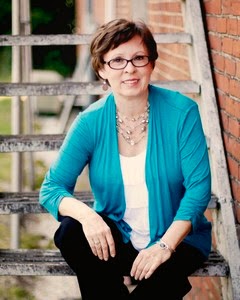