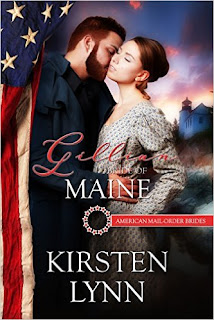 We have had beautiful weather for our journey so far. Next stop on the American Mail-Order Bride trip is Maine where we meet Gillian and author Kirsten Lynn. If you've missed the background on this series, you can read the Prequel HERE.

How Gillian's story came to be:
When I was first asked to participate in this endeavor, I wanted to choose the state of Wyoming. As my readers know, most of my stories take place in Wyoming.  However, Wyoming had already been snapped up. Honestly, now, I couldn’t be happier that I was pushed out of the box and into Maine.  I had such fun visiting Maine again, if only in my imagination. If I had gotten Wyoming there wouldn’t be Gillian and Rhys and I would hate to see a world where their story didn’t exist. For those who’ve started my Navy SEAL series with the book THE AIR I BREATHE, you’ll recognize the name Chermont. Gillian and Rhys are the great-great grandparents of Caleb “Frenchy” Chermont, and I enjoyed getting to know his family a bit better.

I have been a lighthouse enthusiast for many years and fell in love with Maine and Bass Harbor Head Lighthouse when I visited. Here’s a little history of the lighthouse. Congress appropriated $5,000 for the construction of the Bass Harbor Head Light after it was determined that “sufficient need” existed to have a lighthouse near the entrance to Bass Harbor. This was followed by the addition of a fog bell and tower in 1876.  This bell was replaced by a substantially larger 4,000 pound bell in 1898 when it was installed within the tower. The original lens was a Fifth Order Fresnel, but was replace by a Fourth Order Fresnel in 1901. Originally, there was no easy access via a boat landing until one was added in 1894. During the 1970s, the Coast Guard took over the lighthouse. On January 21, 1988, the lighthouse was added to the National Register of Historic Places, under the title of Bass Harbor Head Light Station.

This whole experience has been one of the best in my writing career. I got to explore the rocky coast of Maine again.  We were encouraged to form correspondence groups linking our stories together. I was blessed with an amazing group including: Merry Farmer, Peggy Henderson, and Margery Scott. Our heroines roomed together after the infamous fire and continue to write each other throughout our individual stories.

I will be forever grateful to Kirsten Osbourne for sending me that invitation to join, and to the author who already chose Wyoming, leaving me to meet Rhys and Gillian in a small lighthouse in Maine.

Blurb:
Gillian Darrow travels to Maine with hopes of a bright future with her lighthouse keeper, Rhys Chermont.   The problem…Rhys never placed an advertisement for a wife, or wrote to Gillian. Two hearts longing for a light in life's storms. Together they'll find a safe harbor in love.

EXCERPT:
She smiled at the priest but lifted her gaze to meet Rhys’, and her smile grew until, like a sailor to a mermaid’s song, he was drawn to her side. “I see Ida managed to get you warm.”

Rhys lifted an eyebrow in question. “Ready for what?”

Her eyebrow mirrored his. “Why, to get married.”

Rhys laughed. Nothing was funny about her words, but the thought of him ever marrying again was so ludicrous, laughter was the only response that made sense. That was until he saw those dark eyes fill with unshed tears, which then escaped and cascaded down her cheeks.

Gillian - Bride of Maine released December 11th and is available on Amazon now.

BIO:
Kirsten Lynn is a Western and Military Historian. She worked six years with a Navy non-profit and continues to contract with the Marine Corps History Division for certain projects. Making her home where her roots were sewn in Wyoming, Kirsten also works as a local historian. She loves to use the history she has learned and add it to a great love story. She writes stories about men of uncommon valor...women with undaunted courage...love of unwavering devotion ...and romance with unending sizzle. When she's not writing, she finds inspiration in day trips through the Bighorn Mountains, binge reading and watching sappy old movies, or sappy new movies. Housework can always wait.

You can connect with Kirsten Lynn on her Website