Today, it is my great pleasure to introduce Amber Lea Easton. I know I'm going to make her blush when I say I think she is an amazing person. I don't know if I could go through some of the things she has endured and come out with a smile on her face as show left. But I also hope I make her smile when I say she is an extremely talented author, crafting stories you'll want on your keeper shelf and characters you'll both love and identify with.

Please take time to leave love here and to drop by her website to check out her books. http://www.amberleaeaston.com/


What draws you to writing Romantic Suspense?
I’ve always loved a page-turner and that’s what romantic suspense is for me.  I began reading Nora Roberts years ago.  She truly turned me on to the genre.  I love the elements of a great love story up against great adversity--often life and death scenarios.  The intensity is both fun to write and read.

I’ve heard we put a bit of ourselves into our characters. I have also read Riptides has a powerful emotional connection with you. What do you draw from yourself when creating your characters?  And how did you work past the really deep stuff without losing the realism?

Good question.  I pour my emotion into the characters, which usually means becoming vulnerable myself.  I believe all good characters are flawed and raw.  I’ve been lucky (or unlucky depending on your perspective) to have lived a full life so far.  I’ve taken risks that have resulted in heartbreak, trauma, despair, wonderment, bliss and love.  When I think of a character, though, I don’t consciously say “this is me”; rather, I see the character and pull whatever emotion I’ve experienced that mimics his/hers into their hearts.  It makes them more human.  Yes, Lauren Biltmore, the heroine of Riptide, is more like me than any other I’ve written to this point, but she isn’t me.  She is both the best and worst of me...but is innately her own creation.

It’s true that I experienced some pretty dark things in my life.  The key, for me, was distancing myself through time before attempting to adapt any of it into fiction.  When going through a traumatic experience, it’s hard to gain perspective so any writing about it--outside of a journal--becomes riddled with pain and a distorted viewpoint.  By allowing myself time to heal before attempting to wrestle the experience into a fictional format, I’m able to write about it from a genuine place that is both observation and compassion.

You have a knack for getting to the core of your characters’ conflicts and emotions more than anyone I’ve read. I think you’re doing it again with your next book. Can you tell us about Reckless Endangerment? And do you have a projected release date?

First, let me say that I’m humbled by your compliment.  It means a lot.  I love emotional stories.

Reckless Endangerment is one of the most emotional yet.  I cried not only when writing some of the scenes, but during revisions as well.  Don’t let that deter anyone, though!  Michael and Hope are some of the most profound characters you’ll ever know.

Colonel Michael Cedars is a wounded marine returning home from Afghanistan.  He’s partially paralyzed with his left leg, unsure how to fit into civilian life again after being career military and questions whether or not he’s fit to be married to his wife, Hope.

Hope Shane is a natural wild child.  She met the Colonel while working as a war correspondent, watched him get blown up and returned to Denver, Colorado to bring him home. She’s working as an investigative reporter in Denver and becomes tangled up in a human trafficking story.  As far as Michael wanting a divorce and giving up on life, she’s not one to surrender the fight. That goes for the helpless victims in the story she’s chasing...nothing will stop her until she has truth and justice.

As the danger of Hope’s story intensifies, Michael is tested more than he ever imagined.  Is he capable of being the husband she needs?  Will he hold her back or, worse yet, get her killed?  Is Hope and her penchant for finding trouble a liability he can’t risk? Or is he still the hero she claims him to be?

Heroes come in many forms and range from the woman trying to hold her marriage together to the marine battling even after he’s come home.  That’s what the story is about...heroes.  Heroes and love--with a whole lot of danger, both emotional and physical, thrown in for fun. (I’m sadistic, aren’t I?)

It will be out by June of this year.

You have given great advice to writers (go HERE to see links to other interviews with Amber). What is the most helpful piece of writing advice you ever received and how has it helped you?

To know when to compromise and when to stand firm.  There needs to be give and take without losing your own vision.  I visualize a palm tree that stands firm in its roots against a storm but bends with the wind so it doesn’t break.  I’ve learned through a lot of trial and error that there are people out there who know more than me and I’m grateful to learn from them.  I take what works for me and disregard the rest.  That’s probably why I value editors so much.  I do appreciate another perspective, am open to listen, but I never lose sight of my purpose.

From the place you live to your dream place to retire… they are so different. What do you find may be their common factor in attracting you?

Tranquility.  I live in the mountains above Denver and long to be near the sea.  Both places are peaceful to me.  I love nature, always have.  Although I enjoy the mountains, it’s a hard existence in regards to snow and summer forest fires.  I’ll be old one day, even if I don’t act like it.  My dream is to simplify...walk along the beach every night and every morning, soaking up tranquility.

You can unwrap a Starburst with your tongue, you love seafood and make a killer omelet. What is the one thing a GUY could cook for you that would melt your heart?

I’m impressed with your research.  Ha! You know what?  A guy who can cook anything melts my heart. My late husband was an excellent chef and I miss chilling out in the kitchen with a glass of wine while watching the man work his magic.  I’m easy.  If he can cook, laugh, kiss, and hold a great conversation, I’m IN! 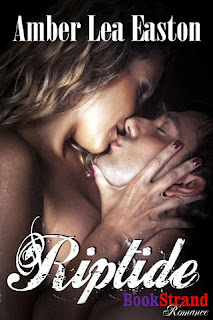 A brief blurb about Riptide:

Attraction sizzles beneath Caribbean sunshine on an island masking betrayal and murder beneath its swaying palm trees. Noah Reynolds and Lauren Biltmore, two loners scarred by their not-so-sweet pasts, discover that together is better than solo when being caught up in a riptide of deception.

He braced his hands over her head. The only thing he wanted to do was kiss her slowly and make her beg for more. He looked into her eyes. “You’re making me forget all of the reasons this is a mistake.”

“A sexy mistake.” Her fingers touched his chest in a feather-like caress. She licked her lips.

“Good point.” He smiled. “We’re headed into the danger zone.”

“You have no idea how dangerous.” She tugged on the towel, a wicked grin in her eyes.

Oh, he had an idea about the level of danger. He’d thought of nothing else for the past forty-eight hours and ranked this situation a solid Level Red. Despite that, all he could think about was how good it would feel to have her long legs wrapped around his hips while her nails clawed against his back. He needed to pull the emergency brake. Slow, he reminded himself. Slow.

Author Bio:
Amber Lea Easton is a multi-published fiction and nonfiction author. For twenty years, she's worked in the fields of journalism and advertising with a brief detour into the financial industry.  Although she holds a BA in Communications & Journalism, she is a perpetual student of life who enjoys taking classes on a wide variety of subjects when time allows.
Smart is sexy, according to Easton, which is why she writes about strong female characters who have their flaws and challenges but ultimately persevere.  She currently has two romantic suspense novels out in the world, Kiss Me Slowly and Riptide, with four more slated for publication in 2013.
In addition to fiction writing, Easton also edits and freelances and speaks on subjects ranging from writing to widowhood.  Current radio appearances are linked via this site and her blog Kisses, Caresses & Whispers in the Night.
Easton currently lives with her two teenagers in the Colorado Rocky Mountains where she gives thanks daily for the gorgeous view outside her window. She finds inspiration from traveling, the people she meets, nature and life’s twists and turns. At the end of the day, as long as she's writing, she considers herself to be simply "a lucky lady liv'n the dream."

Amber Lea Easton’s novels are available through Bookstrand, iTunes, Amazon, AmazonUK and Barnes and Noble.  All of the links are available on her website, http://www.amberleaeaston.com