Good morning, everyone! I haven't had a guest here in awhile so when my friend Judy Nickels contacted me about her new book I knew I had to have her. I hope you enjoy our visit. 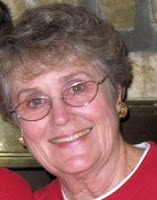 Get to know Judy:
Judy Nickles (also writing as Gwyneth Greer) is a retired teacher and ‘Mimi’ of three. She has four  published full-length novels with The Wild Rose Press and one with Champagne Books, as well as several short stories and articles in online and print magazine and anthologies. Her newest project is the Penelope Pembroke Cozy Mystery Series for Kindle. Books 1 – 4 have been released. The final two books will be available by September 15. She finds story ideas in travel experiences, genealogical research, newspaper articles, and sometimes just through a chance conversation or people-watching. She shares her empty nest with one very large dog and is having her adolescent rebellion 50 years late. Her favorite possession is her Kindle, and her favorite recent memory is taking a ride in a WW II B-24 bomber built the same year she was born.

Thank you for visiting with us today, Judy. Let's let everyone else in on our conversation.

You always said “someday you would write with purpose”. When did you make the leap from hobby to professional?
I suppose it happened when I received my first contract from The Wild Rose Press in 2008. It’s difficult to distinguish between “writer” and “professional writer”—the latter sounds a bit daunting.

How do you balance promotional time with writing time?
I keep my websites updated and use social media sparingly. I have also found a paid source which is both reasonable and rewarding. Another writer who has done quite well with indie publishing shared with me that she gets the word out there and is then done with promotion. What she said made sense and took the pressure off, because I wasn’t really sure that non-stop hardball promo really paid off.

Time travel…would you go forward or backward in time, and what would you most like to experience?
I’d like to go back to the eras of the Great Depression and World War II—not that they were happy times, but they were challenging and character-building. I’d just like to be part of a generation who worked together toward an important goal. We seem to have lost sight of the idea of being united these days.

Some of your books have a recurring theme of WW II. Are you drawn to that time period? And if so, what is the attraction for you?
Well, I was born during WW II and grew up in its aftermath. Most of my friends’ fathers went off to war, and some didn’t come back. (Mine did.) It wasn’t history for us—it was real life. I listened to my parents talk about it—not the war so much as how it was to live day-to-day during those uncertain times. I knew people who endured long separations because of the war, appreciated each other more because of it, and lived totally in the present. The war, though I don’t remember it, is part of me because it affected how I grew up and who I grew up to be.

I know your granddaughter is one of your best friends (mine is, too. Hehe) What do you hope is the most important thing she remembers about time with grandma?
Hanna just turned six. I suppose I want her to remember that I shared myself with her—read her the books/stories I loved as a child, sang the old songs my grandfather (born 1873) taught me to love, took time to talk to her and answer her questions, provided the same structure she has at home (and thus made her secure), and hopefully, built her interest in writing. (I have to have someone to leave my file of ideas for all the stories I’ll never have time to write.) I hope she thinks of me and remembers working alongside of me in my study, her wee desk nestled close to mine, classical music playing, the sun streaming through the windows…and sharing a smile—no words were necessary.

You and your granddaughter enjoy the classics. Which one would you like to see made into a movie and why?
I think they’ve already been made into movies, and I’m just waiting until she’s old enough to truly enjoy them. This summer I read several to her: The Secret Garden and Heidi. Next up is Little Lord Fauntleroy. All of those are already on film. However, I also read to her from a set of 1939 Childcraft (which will be hers someday), and she particularly enjoyed an old Persian tale, “The Crow Peri”. That would make a nice movie. She also loves The Legend of the Bluebonnet, which could be spun off into a good children’s film.

If you could trade places with one of your characters, which one would it be and why?
Jean Kingston in The Showboat Affair. She got knocked down, picked herself up (with encouragement from a friend), and went on to find a happiness she never dreamed existed.  She discovered she was stronger than she thought and courageous enough to give life a second chance.

What is the best writing advice you ever received, and how have you put that advice into practice?
Just write. Get the words down. Worry about ‘cleaning them up’ later. First drafts stink.  I write, revise, write more, revise more…it works.

What form of promotion seems to have worked best for you so far, and why do you think it’s worked?
Probably offering the first book of the Penelope Pembroke Cozy Mystery Series free on Kindle for two days. It got 894 downloads, so I thought it wouldn’t really sell but would spur the purchase of the other 5 books. As of today, it’s SOLD 1,371 copies!
Also, I think pricing is important promo. I could earn higher royalties on a higher-priced book, but people are buying the lesser-priced copies, so it may be a wash.

Your books have real ‘heart’, Judy. What do you hope your readers come away with?
Today more than ever, people need to take away a feeling of peace and hope from what they read, and I’d like to think I can provide that. The themes of forgiveness and reconciliation run through my books. We need those things, too. I don’t target my books as Christian fiction, because that’s ‘preaching to the choir’. But I’d like to subtly share the deeply-held beliefs which have helped me survive.

Tell us a little about The Bogus Biker and Penelope Pembroke
Penelope Pembroke is the owner of the best (only) B&B in Amaryllis, Arkansas (pop. 5492) who’s
flirting with 50, divorced (Travis Pembroke, had a wandering eye'), mother of Amaryllis PD Detective Bradley Pembroke, apple of her father Jake Kelley's eye, best friend of Mary Lynn Hargrove, the mayor's wife, and the only human creature tolerated by Abijah, the 18-pound orange tabby who stalks the family home-turned B&B.

Penelope keeps her ear to the ground, her eyes open, and her battered heart in solitary confinement. Then one night, while having a beer and a Reuben at the seedy-though-popular Sit-n-Swill, she meets Tiny aka Sam who is about as much of a biker as she is a belly dancer.

She insists on dabbling in danger and disaster despite Sam's best efforts to discourage her. The fireworks begin in Book 1, light up the skies in Books 2,3,4, and 5, and end in one spectacularly explosive display in Book 6.

Book 1: The Bogus Biker
A police raid on the Sit-n-Swill, a devastating fire at her ex-husband's historic home, and a game of cat-and-mouse with Tiny aka Sam turns Penelope's placid life upside down.

EXCERPT:
“I know what I heard.” Penelope Pembroke leaned across the table in the kitchen of the Amaryllis Bed and Breakfast, of which she was proprietor, and tapped the woven placemat with a well-manicured, unpolished nail. Blowing away the strand of honey-blonde hair falling across her nose, she readjusted the narrow tortoise-shell glasses perched on the end of that appendage, and leaned closer to her best friend Mary Lynn Hargrove, wife of the town’s longtime mayor. “I’m not senile, you know.”
“No one said you were.” Mary Lynn placated Penelope as she’d done since the first day they’d met in high school some thirty years earlier.
“You implied it.” Penelope reached down for the orange tabby nosing around her sneaker-clad feet and lifted him into her lap. “Abijah heard it, too.”
Mary Lynn rolled her dark eyes
toward the hairline of close-cropped black curls. “The only thing that blob hears is the sound of the can opener signaling dinner.”
“He’s not a blob.”
“He’s obese. He’s going to keel over one of these days. Death by Feline Feast.”
“Oh, shut up.” Penelope stroked the cat, whose ample hindquarters hung over the edge of her lap. “Anyway, I heard what I heard.” The strand of hair drifted across one lens again, and she blew it away and tucked it firmly behind her ear, which set the long silver and turquoise earring swaying. “They specifically said the word ‘shipment’ and mentioned the Sit-n-Swill.”
“Roger Sitton gets shipments all the time. It’s a bar and grill you know. He doesn’t make moonshine in his bathtub or slaughter his barbecue out back.”
Penelope sat back and shifted the cat to distribute his weight more evenly. “These guys weren’t blessed salesmen, I’m telling you. They were, well, Mafia types.”
Mary Lynn snorted. “Mafioso? Then by all means call the police. Call the FBI. Call out the National Guard or maybe the Marines.”
The smirk on her friend’s face rankled Penelope, but she kept her cool. “I thought about calling Bradley, but he’s worse than you are. He’s convinced I lost it when I divorced his father.”
“He was fifteen then, and it got you a better settlement than if you’d waited on Travis to divorce you.”
“That’s true. I wasn’t so dumb, and I guess he knows that now. He just can’t admit I was right to dump his father, but the man couldn’t keep his blessed pants zipped. I put up with it as long as I could.”
Mary Lynn shook her head. “That’s a dead mule. So tell Brad about the men.”
“Since he got that fancy new title at the police department, he’s not that easy to talk to.”
“CID. Criminal Investigation. Detective Sergeant Bradley Pembroke. You know you’re proud of him, Pen.”
“Just so proud I can’t stand myself.” Penelope’s generous mouth parted in a wide smile. “So’s Daddy. I just wish his grandmother could’ve lived to see what he’s done.”
“Your mother would’ve been proud. So would old Mrs. Pembroke. She was crazy about him as I remember.”
“I think she knew Bradley wasn’t going to turn out like his father.” Penelope frowned. “You’re changing the subject. I know what I heard.”
“Then tell Roger.”

“Roger Sitton has lace on his drawers, for Heaven’s sake. He’d no more be involved in a drug deal than I would.”

I love your description of Roger Sitton. I can't wait to meet him and I'm sure my fans can't either. Where can they purchase your book?

They can find The Bogus Biker as well as my other books through Amazon  for ebook and print or CreateSpace for print.