The office still isn't done. While the cleaning part got done, one project towards moving back in took much longer than I'd planned.  For one, I've had two rolls of beautiful fabric since before the studio was built. I found the fabric at Tuesday Mornings and knew the soft chocolate brown would be perfect for a sofa cover. The rolls stood in the corner all this time. Bob asked one morning what I was going to do with the fabric.

So out came the fabric and the sewing machine. I had a clear workspace of the sofa and a clean carpet to work on. The timing was perfect. I didn't realize I would spend an entire day measuring, sewing the sofa cover AND the valances for the five windows. The curtain rods had stood at the end of the sofa, still in their walmart bag, for at least two years.

I now have a sofa cover and valances. Then Bob came home. The following day his best friend from grade school arrived and my time became about cooking meals, keeping dishes washed up and getting Bob's laundry done in prep for his next trip out - which is tomorrow.

Then on Monday afternoon - when I thought I could get back in the office.. 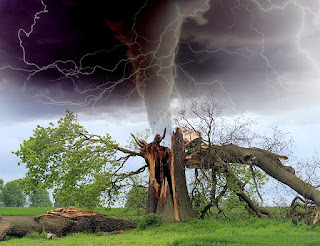 Not one but two HUGE storm waves moved through. Hail and wind like I've never seen. The Wall of Wind took out over 150 power poles in our area, including the main one going to our house. We were without power for 52 hours (for those of you not doing math, we didn't get power back until early Wednesday evening) While they did not classify the storm as a tornado, they did refer to the damage as being caused by a wall of wind.

I was raised to 'survive the storm' (to coin a phrase from our local weather channel) I had a supply of both drinking water and water for cooking/ flushing/ washing up. We have a gas stove so eating real food was still an option.

That also meant extra work and no lights to clean by in the studio. By the time we had power back, I just wanted to do nothing whenever possible.

Kevin left on Friday and I've spent all of the past full week doing things with Bob before he goes back out.  We didn't realize until the house was quiet how much we really enjoy our 'just the two of us' time out here in the middle of no where.

FYI, I'm finally able to sit and write blog posts today - Thursday 5/14/20. I am back to work and hope to get regular posts flowing again.

I have conference news coming on Wednesday.

For those of you waiting, Book 2 will be slightly delayed in release. Between all that's been going on here and not being able to get with the lovely lady who is teaching me book formatting, this one could not be helped. I will say, if this is the only hiccup I have due to this stupid lack of normality in our life then I can live with this.