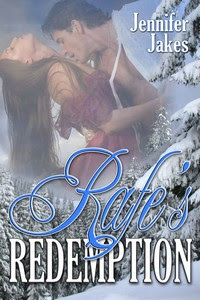 First off, I owe Jennifer a huge apology. Posting this earlier today totally slipped my mind when hubby's first words were, "I'm awake. Let's go shopping". What's a girl to do?
I've known Jennifer for about a year. We're in the same Ozarks Romance Authors group and both have our eye on country boy Jake Owens. So today, and for the whole weekend, I introduce you to Jennifer Jakes!
After trying several careers—everything from a beautician to a dump truck driver—Jennifer finally returned to her first love, writing. Maybe it was all those Clint Eastwood movies she watched growing up, but in her opinion there is no better read than a steamy western historical.
Married to her very own hero, she lives on fifteen acres along with two beautiful daughters, two elderly horses, two spoiled cats and two hyper dogs.
During the summer she does Civil War re-enacting and has found it a great research tool, not to mention she has continued appreciation for her microwave and hot water heater.
Visit Jennifer Jakes at www.jenniferjakes.com
1. Why do you write?
I guess it’s for the same reason all writers write – we have to get the voices out of our heads!
2. I know you began writing stories at a young age. What led you to Historical romances?
My favorite stories as a young girl were those about Pocahontas and Sacajawea. As I got older, those historicals just turned into a love for Historical Romance. And I have to write what I love.
3. How did you get into taking part in Re -enactments?
My interest in Western Historicals and the Civil War era led me to attend several reenactments. I met a lot of wonderful people there and in talking to them was soon donning my petticoats and bonnet.
4. Do you have a story you’d like to tell but doesn’t fit what you typically write? Actually, I do………and I just finished it! My newest release, TWICE IN A LIFETIME, – out the end of this month – is still historical, but it’s set on a pirate ship in 1768. So the secret is out: My other writing love are Pirates.
5. What is your favorite Holiday and do you ever use it as part of the setting in your books?
I love Christmas – the decorated trees, the twinkling lights. It takes me back to when I was a kid and that magical feeling children get around Christmas.
My debut novel, RAFE’S REDEMPTION, is set during the Christmas season and includes lots of snow – enough to trap my heroine and hero together in a cabin
Blurb for RAFE'S REDEMPTION:
He rode into town to buy supplies, not a woman.
For hunted recluse Rafe McBride, the raven-haired beauty on the auction block is exactly what he doesn't need. A dependent woman will be another clue his vengeful stepbrother can use to find and kill him. But Rafe's conscience won't let him leave another innocent's virginity to the riff-raff bidding. He buys her, promising to return her to St. Louis untouched. He only prays the impending blizzard holds off before her sultry beauty breaks his willpower.
She wanted freedom, not a lover.
Whisked to the auction block by her devious, gambling cousin, and then sold into the arms of a gorgeous stranger, outspoken artist Maggie Monroe isn't about to go meekly. Especially when the rugged mountain man looks like sin and danger rolled into one. But a blizzard and temptation thrust them together, and Maggie yearns to explore her smoldering passion for Rafe.
But when the snow clears, will the danger and secrets that surround Rafe and Maggie tear them apart?
Blurb for TWICE IN A LIFETIME:
Be Careful What You Wish For. . .
No-nonsense stuntwoman Isabella Douglas will do anything to stop an unwanted divorce and reclaim the happy life she had, even allow her old friend to concoct a magical spell to turn back time. But when the spell goes awry, Izzy finds herself trapped aboard a 1768 Caribbean pirate ship with a captain who’s a dead ringer for her sexy as sin husband, Ian. Convinced he’s playing a cruel joke, she’s furious – until she realizes he doesn’t know her or believe they’re married.
Captain Ian Douglas does not have time to deal with an insane woman who claims to be his wife; he has to save his kidnapped sister. But as Izzy haunts his dreams and fills him with erotic memories he can’t explain, he’s forced to admit he feels more than lust.
Trapped in a vicious cycle of past mirroring present, Izzy knows they only have days to find Ian’s sister and prevent disaster from striking a second time. If she doesn’t, their marriage will be destroyed again – along with the man she loves.
Thanks for stopping by and checking out the Fast Five with Jennifer Jakes. Please check out her website. You can also go directly to
http://tinyurl.com/42sn4n5 and Amazon: http://tinyurl.com/3vrdc9f
to pick up your copy of Rafe's Redemption!
Angela!
Posted by Angela Drake at 8:05 PM