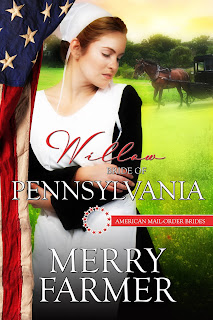 I am so excited to introduce you to the first book in the American Mail-Order Bride series. First state we visit is Pennsylvania.  Here is how Willow's story came to be for author, Merry Farmer.

I was incredibly fortunate to find out about this project right at the very beginning. I was in on things early enough to get my first pick of states, my home state of Pennsylvania. I always tell people that I’m not particularly patriotic, but I’m incredibly state-riotic! Pennsylvania is an awesome place with so many wonderful things going for it. We have some of the world’s premier universities (including my alma mater, Villanova), first-rate museums and sports teams, major industry, vast natural resources, Hershey’s chocolate the Liberty Bell, and Gettysburg. In fact, if Pennsylvania were to become its own independent country, it would have the 15th largest economy in the world, all by itself!
Now, when it came to writing a romance novel about Pennsylvania, I knew I had to tap into Amish romance. Living near Lancaster County, I’ve always enjoyed Amish romance and been fascinated with the community and culture. It’s an easy drive, and one that I make often to sample the crafts and food and the general serenity of the people. I jumped at the chance to write an Amish love story, but because I wanted it to fit in with the backstory of the whole American Mail-Order Brides series, I knew I needed to find a non-traditional way in.
That’s how I came up with the idea of writing a heroine whose grandparents were Amish and who is fascinated by her heritage, but was not raised that way herself. I also included a hero, Amos, who was raised Amish, but who was never baptized due to a conflict that is more than a decade old. In his heart, Amos wants to return to his community, but years of resentment is holding him back…until Willow comes along.
Willow: Bride of Pennsylvania is more than just a love story, it’s a story of community and friendship. It’s a story about how we not only need a strong, core, romantic love in our lives, but how we need friends and neighbors to make out life full. It’s a sentiment I strongly believe in. I hope that by reading about Willow and Amos, readers will be reminded of their own friendships and the people they have come to consider their family and their community.

BLURB –
When Willow Miller decides to change her life by becoming a mail-order bride to ex-Amish, Amos Stoltzfus, hope may carry her forward, but guilt over her part in the fire that destroyed the factory where she works holds her back.

“Willow Miller?”
Willow caught her breath and turned with a start. A numb buzz swept through her body as she caught sight of a man walking toward her. He was tall with broad shoulders and arms that stretched the fabric of his simple blue shirt. He was clean-shaven, with walnut-brown hair and hazel eyes that crinkled as he smiled. His clothes were similar to the Amish men on the platform, but just different enough to mark that he was not one of them. All-in-all, he was a very handsome man. And he held three apples in one of his large hands.
“Willow?” he asked a second time.
Willow opened her mouth to reply, but only a squeak came out. She wouldn’t let herself ruin things so soon. Instead, she nodded vigorously, face hot with a blush, until she found her voice. “Yes. Amos Stoltzfus?”
His smile widened. “That’s me.”
* * *


GIVE AWAY!
Merry is giving a FREE copy of Willow - Bride of Pennsylvania away once the eBook is released. To enter, just leave a comment below telling us why you are looking forward to reading Willow's story and your email so I can contact you in the event that you win. Good Luck!

Merry Farmer is a bestselling, award-winning novelist who lives in suburban Philadelphia with her two cats, Butterfly and Torpedo. She has been writing since she was ten years old and realized one day that she didn't have to wait for the teacher to assign a creative writing project to write something. It was the best day of her life. She then went on to earn not one but two degrees in History so that she would always have something to write about. Her books have topped the Amazon and iBooks charts, and been named as finalists in the prestigious RONE and Rom Com Reader’s Crown awards. 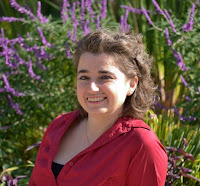 You may Pre-Order Willow - Bride of Pennsylvania on Amazon